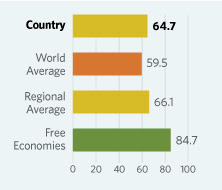 Bulgaria’s economic freedom score is 64.7, making its economy the 61st freest in the 2012 Index. Its overall score is down slightly, reflecting deterioration in freedom from corruption, government spending, and business freedom.
Bulgaria is ranked 27th out of 43 countries in the Europe region, and its overall score is above the world average but below the regional average.

Bulgaria has weathered the impact of the global economic downturn relatively well, with the economy supported by generally prudent public finance management.

Continued reform to strengthen the foundations of economic freedom, however,will be indispensable in ensuring vibrant economic development in coming years. Lingering corruption and the weak rule of law have added to the cost of conducting business. Bulgaria’s transition to a more open and flexible economic system has been facilitated by substantial restructuring measures over the past decade. While maintaining macroeconomic stability, it has made considerable progress in income growth and poverty reduction. Competitive flat tax rates and a competitive trade regime, supported by a relatively efficient regulatory framework, have encouraged the development of a growing entrepreneurial sector.

Background: Bulgaria joined the European Union in January 2007 but has not adopted the euro. The center-right GERB (Citizens for European Development of Bulgaria) party was the clear winner in the July 2009 parliamentary elections but relies on the support of a right -wing nationalist group, Ataka, to pass legislation.


In late 2010, France and Germany announced that they would block Bulgaria from joining the EU’s passport-free zone until it makes “irreversible progress” in fighting corruption. Tourism, agriculture, and mining, including mining of coal, copper, and zinc, are the leading industries.

RULE OF LAW
Respect for constitutional provisions securing property rights and providing for an independent judiciary is somewhat lax. The judicial system is unable to enforce property rights effectively, and inconsistent application of the rule of law discourages private investments. Despite legal restrictions, government corruption and organized crime present a threat to Bulgaria’s border security.

REGULATORY EFFICIENCY
Launching a business has become less time-consuming, and licensing requirements have been eased, though the pace of change has lagged behind some other countries in recent years. Labor regulations are relatively flexible, although the non-salary cost of employees can be burdensome. Labor productivity has been slightly higher than wage increases. Most prices are determined by market forces, and inflation has been modest.

OPEN MARKETS
The trade weighted tariff is 1.4 percent as in other members of the European Union, with myriad non-tariff barriers sometimes nullifying the low tariff. Foreign and domestic investors are treated equally, but arbitrary bureaucracy is an impediment to more dynamic investment. Privatization of state-owned banks is complete, and foreign banks account for more than 80 percent of total assets. Credit is generally allocated on market terms.
Posted by http://meliton-group.blogspot.com/ at 11:08